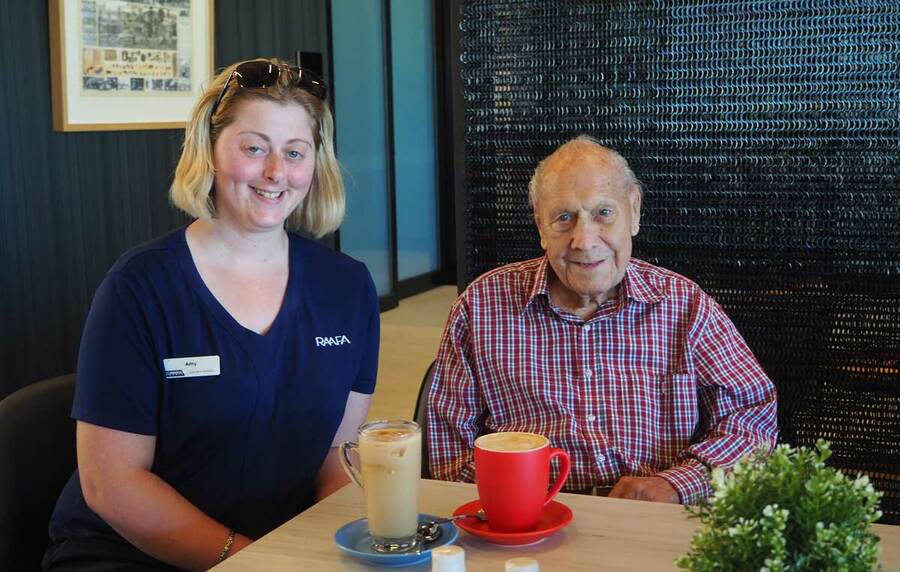 WWII veteran and AFME resident Roy Fuller remains an active and independent member of the AFME in Bull Creek at the sprightly age of 95, with the support of his family and the care team at RAAFA Connect.

Born in India to British parents, Roy went to a military boarding school from the age of seven to 14, but was forced to leave after his railway engineer father was killed in an industrial accident.

Roy joined the British army in India at the age of 14, initially starting in the rank of ‘Boy’.

He began his active service a few years later, age 17, when he served with the celebrated British 2nd Battalion, The Parachute Regiment – known as 2PARA - and completed 99 parachute jumps, not quite making his century.

During his time as a serviceman he suffered a few broken bones, was hit by shrapnel in an explosion as he witnessed grenades being thrown, and was involved in hand-to-hand combat - all of which he says was considered fairly normal for those serving at the time.

Since 1949, Roy has faithfully kept his Leave Pass in his wallet, just in the event of the military police charging him with being AWOL (Absent Without Leave).

Today Roy is a popular member of RAAFA’s community, who enjoys sharing a shandy or two with the ‘younger’ blokes. Indeed, amongst his estate friends he’s affectionately known as ‘The Chairman of the Board’, where he wields his gavel which keeps everyone in order.

According to his daughter Dawn, Roy - who has three children, seven grandchildren and eight great-grandchildren - is a familiar face on the estate, where he travels everywhere on his gopher.

“There’s even been a few speed complaints, I’m sorry to say,” says Dawn. “And I think it’s safe to say he enjoys a little more than just one shandy at the club with his mates.”

As an independent member of AFME, Roy has assistance from the care team at RAAFA Connect seven days a week. A member of the team helps him with domestic and social support, as well as meal preparation, every day. Despite needing to be helped with his daily medication, he leads a full life, heading down to the new club most days to see his friends, and going out to the Coffee Club at the local shopping centre to enjoy a cuppa, as well as the odd treat.

“He’s on a Level Four package and has great support every day, it keeps him living independently as he doesn’t want to go into Gordon Lodge - he says that’s for older people,” laughs Dawn.

RAAFA Connect nurses and support staff work together to improve a person’s ability to stay at home. They do this by listening carefully to the needs required and coordinating a personalised service that specifically suits an individual’s needs.

For more information, RAAFA Connect can be contacted on 9288 8470 or via connect@raafawa.org.au