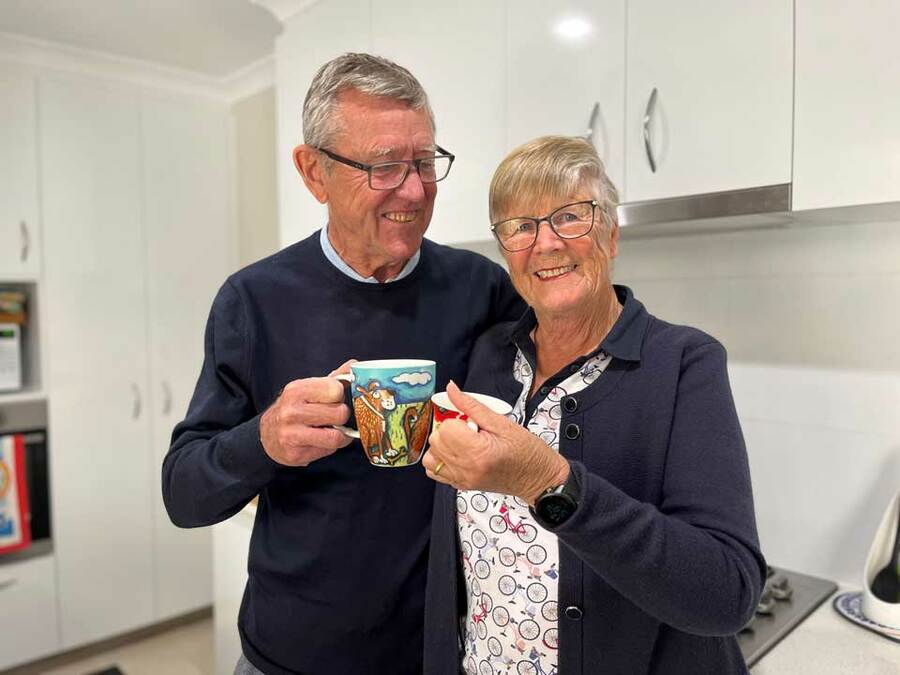 Erskine Grove couple Jim and Leslie Smith fell in love at first sight when they met during their time in the Royal Air Force, back in 1967.

“We pretty much knew immediately, and after three days had decided to get married,” says Jim, who trained as a radiographer at the Royal Herbert Hospital in Woolwich, in southeast London.

“We really did fall in love immediately, but I think you could call it a fairly successful partnership given we’ve been together ever since,” laughs Leslie, who says she always knew she wanted to go into the Air Force as a young woman, and who trained as a registered nurse at RAF Hospital Halton in Buckinghamshire.

The young couple went on to get married at Bolton Abbey on 11 May 1968. Although Leslie had left the RAF at that stage, Jim continued to be posted to various RAF hospitals throughout England, Germany and Gan in the Maldives for the next decade, resulting in the couple living in 10 different houses in 10 years.

After having their two children, Jim and Leslie decided they wanted more opportunities for their son and daughter than the North of England could offer and, after several attempts, they were successful in their bid to emigrate to Western Australia - although they were told they would need to work in Kalgoorlie for six months - Leslie as a midwife and Jim as a radiographer.

“What we thought would be a stint of a few months lasted 20 years as we just loved Kalgoorlie and became really immersed in the community,” says Leslie, who also set up the Enrolled Nursing course at Kalgoorlie’s local TAFE.

“I just loved learning and went on to get my graduate diploma in adult education from the University of South Australia, and then my Master’s in Education from Murdoch University by external studies.

“And that’s despite being an unsuccessful student at school,” Leslie laughs.

After two major health scares, the couple decided to take a sea change and moved to Esperance in 2000, where they both worked part-time and enjoyed travelling throughout the state with their caravan, often in the northwest during winter.

“We loved Esperance and were there for 20 years, but by this time our children had moved closer to Perth and we decided we wanted to be nearer access to health care, and also our grandchildren, so we started searching for another home near Mandurah,” explains Jim.

“We were looking at houses when we happened to drive past RAAFA’s Erskine Grove, so we parked near the admin centre just as three ladies were walking back home after using the swimming pool. One of them was Betty Burton, and she stopped us and said she’d be happy to invite us over to her house for a cuppa.”

The rest, as they say, is history and once again the couple very quickly became smitten with the estate.

“I just fell in love with Erskine immediately and could see all the positives, even though it was quite a wrench leaving Esperance as we were heavily involved in the golf club, and Jim was also in the local Bridge club,” explains Leslie.

“But it ticked all the boxes and so we made an appointment to see Caroline, the estate manager, and we brought our daughter along to the meeting, and made sure we asked lots of questions.”

After being shown four houses at the estate, the couple made their choice and moved into their new home back in June 2021.

“For us, there was an increased connection with the village because we’d both been in the Air Force, and we were really keen on having a lifestyle where we could just hitch the caravan up and go, and not worry about leaving the house or looking after our half acre garden,” adds Jim.

“We really love the position of the house, the friendly neighbours, the active resident’s committee and also the estate.

“We obviously have a track record of falling in love very quickly, but once again, we’re very happy with our decision and have no regrets.”