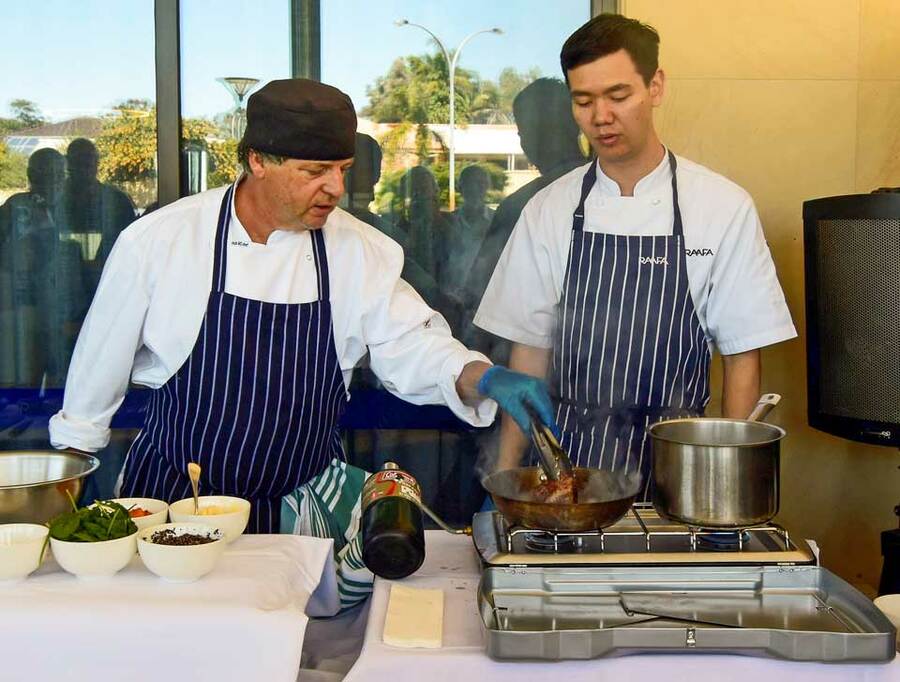 Veterans’ Health Week is an annual health promotion initiative held every October, aimed at increasing healthy lifestyle awareness for veterans and their families.

And this year the focus was on eating well and nutrition which inspired the organising of a culinary and educational event at AFME by David Cocks, the President of the Combined Defence Force Support Association (CDFSA), which undertakes advocacy work for all veterans, whether they’re from the Navy Army or Air Force, throughout Australia.

The event itself included a workshop on healthy eating by a local nutritionist and included a cooking demonstration, ‘eating well’ menu and a talk offering lots of nutritional tips and tricks, all compared by David and organised with the help of CDFSA members Helen Cooper and her husband Kim.

Both David and Helen agreed that the event was very well received and all who attended had the opportunity to learn a few new skills and gain some great tips on healthy eating.

“Our guest speaker Zoe is a local nutritionist who is passionate about health and wellbeing and was a real hit,” says Helen. “Our chefs cooked up a storm on the barbeque and everyone enjoyed the demonstration immensely, as well as the healthy lunch provided.”

“It all went very well and it was great to see how much everyone enjoyed the day and the food,” says David, who adds that he would like to get more members from CDFSA along to the event next year.

As part of the day, representatives from Dinnertwist - a local company which provides healthy meal boxes at reasonable prices – gave a talk about their products and their aim to provide good quality, locally sourced food.

In addition, the veterans’ mental health support organisation, Open Arms, was also represented, with a speaker from the organisation emphasising the importance of healthy eating habits in conjunction with good mental health.

“The event was excellent and it was great to see so many veterans attend,” said AFME resident and veteran Ted McEvoy, who estimated there were around 80 people in the estate’s function room.

“I think everyone who went along learnt lots, and I for one will be trying out some of the handy hints. For example, I never knew how easy it was to cook quinoa, or how healthy it was, but I’m looking forward to trying it out for myself.”

If you would like more information on the Combined Defence Force Support Association (CDFSA) and its services, David can be contacted on 0417 112 100.