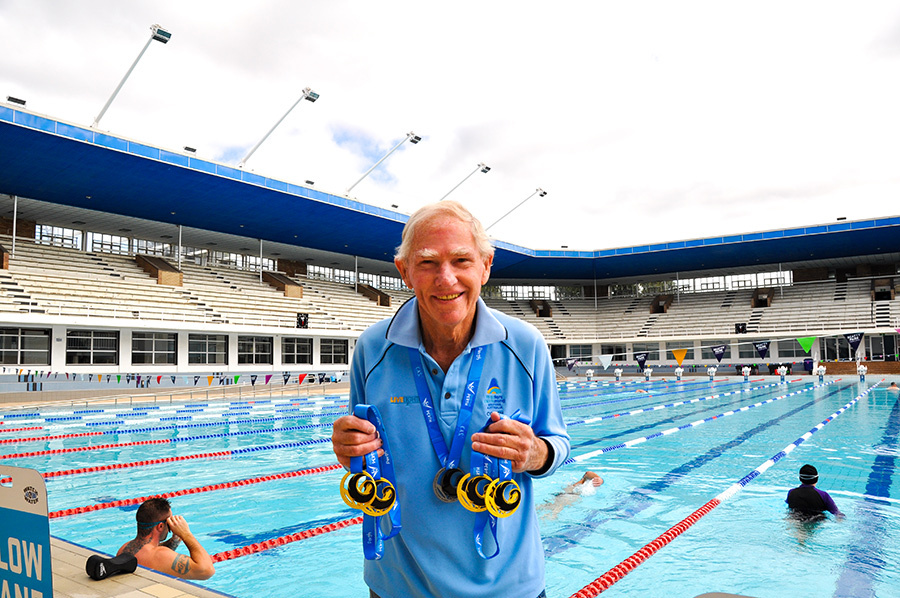 Merriwa Estate resident John Lockley collected four gold medals and one silver at this year's Australian Masters Games in Perth at the end of April.

But the 85-year-old retired teacher is characteristically humble when discussing his haul of awards.

"Well, I was in the 85 to 89-year-old age group and there was only six of us in that category, so I guess you have a better chance of winning a medal at my age," he laughs.

Although he grew up in Bridgetown where he spent time swimming in the local Blackwood River during the holidays, John admits that it wasn't until he and his wife Pat were in their early-50s that they really took up swimming.

"Pat and I joined the Osborne Park Masters when we were 51 to keep fit and we loved it, in fact we still love it now though to be honest Pat is significantly fitter than I am which I find quite disgusting," John laughs. "She'll keep going whereas I have to have more rests, but we both stick at it because we just feel so good for doing it."

John explains that, about 15 years ago, he decided to undertake the coaching course which the Masters club runs and, as a result, he coaches seniors every week at Beattie Park.

"Coaching is something I find very rewarding and thoroughly enjoy," says John, who moved into Merriwa Estate with Pat about 12 years ago.

"Helping people to become more confident in the water and to develop their technique is something I very much enjoy, I guess that comes from the retired teacher in me.

"But I'd also say that swimming is just fantastic exercise because it supports your weight and is great for muscle tone, in fact it's far less impactful than almost any other exercise, where it's common to get hip, shoulder, back and knee injuries."

As a result of their involvement in Masters' competitions Pat and John - who have been married over 60 years and now have nine grandchildren and four great-grandchildren - have travelled to Tasmania, Darwin, Melbourne and Adelaide to take part in competitions.

"We've won a few medals in our time, though COVID-19 has slowed things down over the past couple of years," John adds.

"And even though Pat and I have the usual aches and pains, we still swim four or five times a week and in fact it's fair to say we're both more agile in the water.

"That's especially so for Pat, who's usually a 100 or so metres in front of me at any time. In fact, I have to keep practising so that can I keep up with her," he laughs.

Congratulations John from everyone at RAAFA on your haul of medals at the Masters, which included gold medals for - 50, 100 and 200 metre backstroke, 50 metre freestyle and a silver for 100 metre freestyle. Such a fantastic achievement!