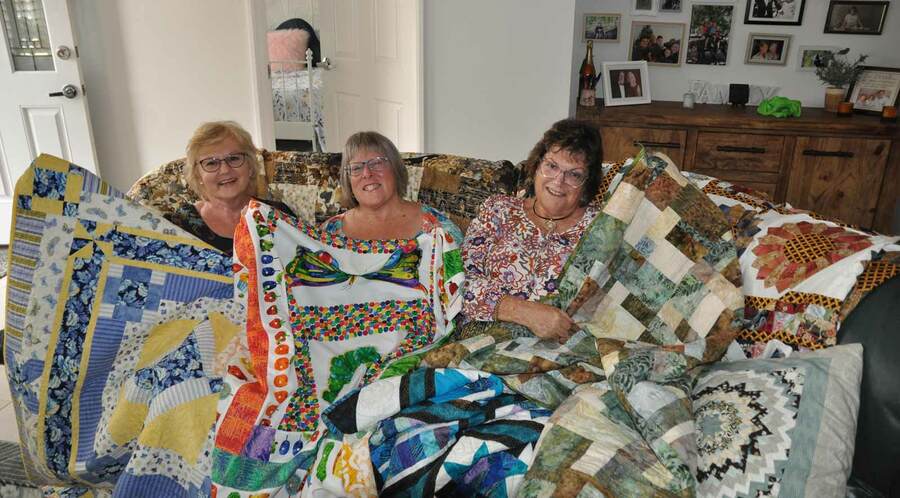 When Carol Logan decided to move into RAAFA’s Cambrai Village almost three years ago, she started quite a trend.

As a result, Carol’s close friend Kate Lugg moved on to the estate in September 2020, and another girlfriend Alana Hill, together with her husband Kevin, also became new residents in November.

“Who would’ve thought that three quarters of my quilting group would join me at Cambrai Village,” says Carol with a smile.

“I first met Kate at work back in 2005 when I was an early childhood teacher and she was working as an education assistant,” says Alana, who reveals that she and her husband are loving their new community just weeks after moving in – and are also now close to Kevin’s mother, who lives at Vivian Bullwinkel Lodge.

“I knew that Kate was a quilter and after pestering her she offered to teach me. And then we met Carol, a novice quilter, who was a friend of a friend, after joining a social quilting group.”

Today, the firm friends are still as enthusiastic about patchwork and quilting as they were when they first took up the hobby many years ago, and are hoping to become involved in a quilting group at the estate next year.

“We all just love textiles and the feel of fabric, as well as the colour, and there are so many different techniques now in relation to how to piece things together,” adds Kate who also says she fell in love with her unit at Cambrai just by looking at it from the outside, at which point she just knew it was going to be her future home.

“I’ve been quilting for 36 years, long before all the cool gadgets came in,” she laughs. “I think we have been very lucky to find such firm friendships as a result of our passion for patchwork, and it will be fantastic to set up a group here at Cambrai at some point in the future so that more people can join us if they’d like to.

“We make lots of different things, from quilts to table runners, wall hangings and even sleeping bags for our grandchildren. It’s a really fun and creative thing to do, and you can often make the perfect gift for a friend or family member.”

After talking with other residents, the girls have discovered there are residents who are also interested in the craft of quilting. So watch this space for more information about new quilting groups starting on the estate in 2021.

And in the meantime, they are unanimous about one thing – each one of them is very happy to chat to anyone about quilting at any time!