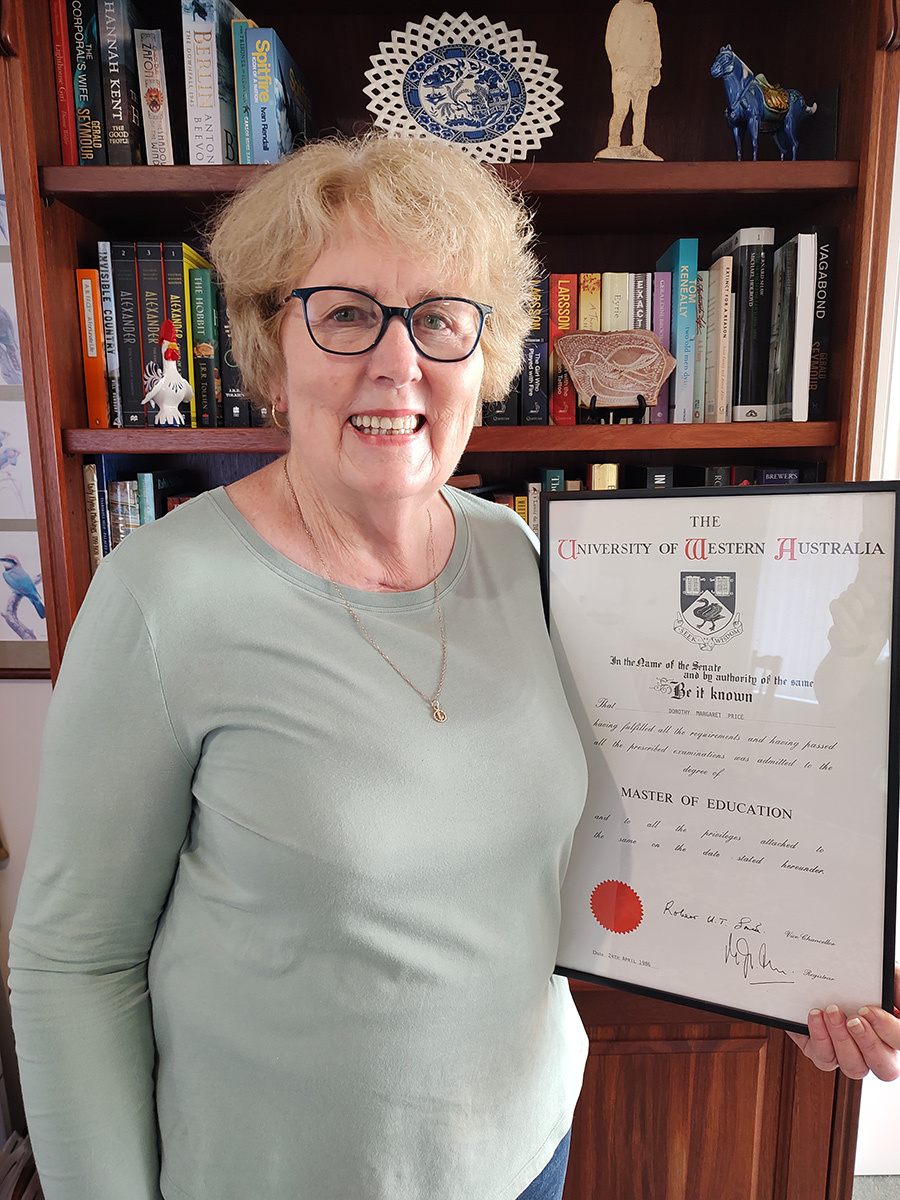 It's fair to say that RAAFA's Amity Village Albany residents Leigh Sheldon and Dot Price blazed a trail for other women in WA's education sector during their own lifetimes.

With more than 70 years of combined experience as teachers and educators, the two women both reached the top of their field as Principals of various schools throughout the state.

For Leigh, forging a highly successful career in education was not completely unexpected given her family's history. Her grandfather was a headmaster in rural New South Wales who was recalled from retirement due to a Principal shortage when he was 83 years old. Her great aunt was also a headmistress, as they were called at that time, and her sister-in-law and several cousins were teachers.

"I was always interested in education, so I did a teaching degree at UWA and then decided to focus on primary school teaching which I had really enjoyed in my prac teaching experiences," explains Leigh, who has lived at Amity Village for nearly three years.

"I always loved classroom teaching and did so from 1973 until 1989. Then one day, my principal asked why I'd never applied for promotion, and I said I never really thought I was good enough. I have a lot to thank him for as he mentored me from that day and, as a result, I gained my first principalship at Karlgarin Primary, a delightful small country school in the Wheatbelt – and what a joy it was.

"Since that time, I have led a number of schools and worked in other management and leadership roles in the Education Department, all of them very different. I've always been keen to learn new skill sets in the different environments in which I've found myself. Since retirement, I've maintained my connection with children and schools, mostly as a classroom volunteer in Albany where I work with some very special children, which I find so rewarding.

"As a woman, I would encourage other young women to follow their passion and grasp every opportunity on offer that really appeals to them. Do the hard work and, unlike me, never doubt yourself."

Coincidently, Leigh and Dot's professional lives intersected when Leigh was working in the Selection Unit at the Education Department's central office and Dot was a panellist for a principal selection process.

"Although I didn't know her prior to that time, I remember being very impressed with how intelligent and sharp she was," recalls Leigh.

Born in Kalgoorlie, it was no surprise that Dot, like Leigh, followed her passion for education given her sharp mind and the fact that she ‘absolutely loved school', despite her father having an attitude that girls were never as capable or as bright as boys.

"I loved everything about learning, being at school fascinated me and I relished being busy and involved in the classroom," says Dot, who was one of six children.

"I worked in many different schools over the years and then thought to myself, I can do more, so I applied to become a principal and the rest, as they say, is history.

"The highest priority for me has always been the kids. No two children will ever be the same, so it's about understanding how they learn and being flexible in your teaching methods.

"I think both children and parents know when you strive each day to be a good teacher. It's been a priority for me to ensure that children enjoy learning, that way if they're having a good time in the classroom, they are far more likely to take in what they're being taught.

"I loved my career in education and being able to make a difference to young minds and young lives. My father had an attitude that being a girl meant you were never as good as a boy, but I'd like to think that I very much proved him wrong."

International Women's Day is marked annually on 8 March. It's a global celebration of the social, economic, cultural, and political achievements of women. It's also a time to reflect on women's progress, to call for change and to celebrate the achievements of ordinary women who have played an extraordinary role in their communities.

Clearly women like Leigh and Dot, two unassuming and yet extraordinary women, have undoubtedly played a vital role in the lives of many young West Australians.