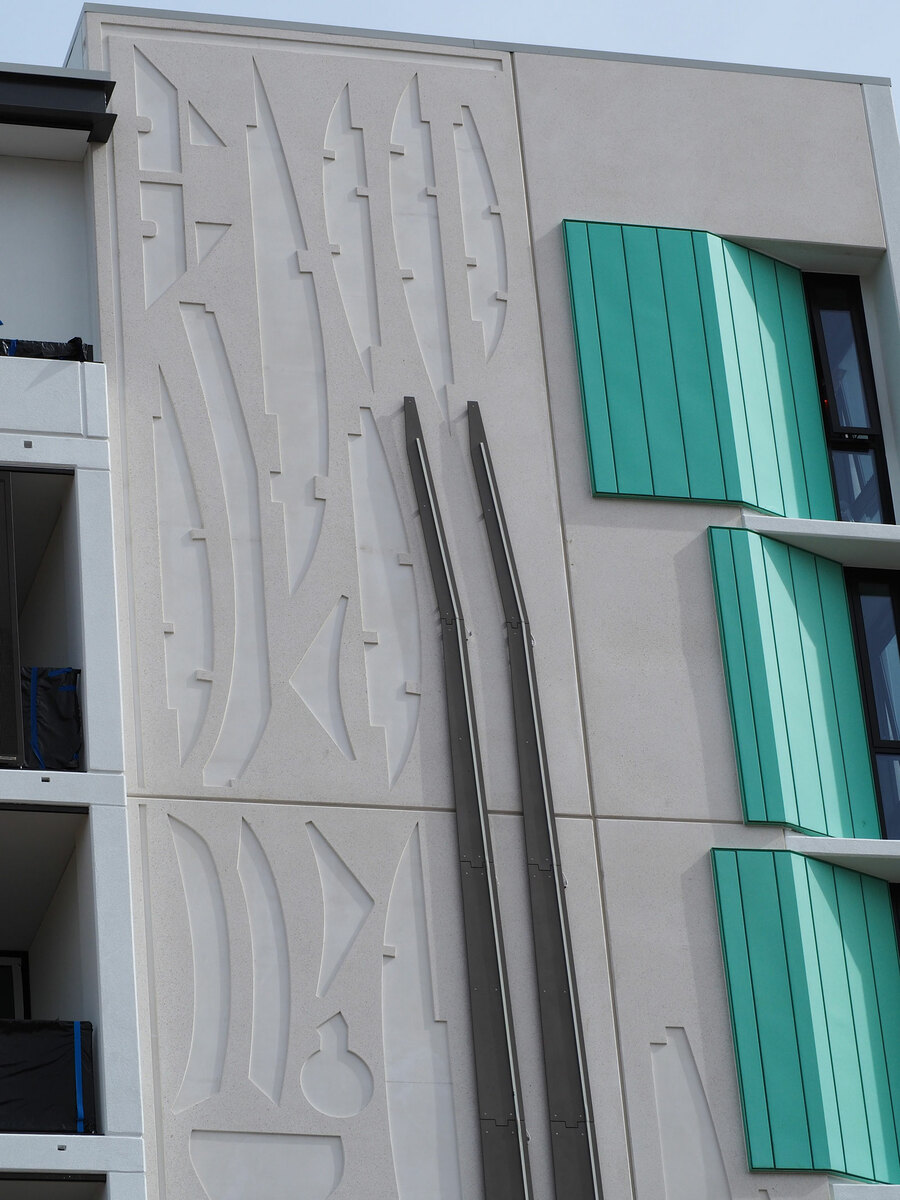 AFME is set to be given a very pleasant aesthetic boost in a week or two, with the installation of four new stunning and sustainable artworks to complement the new Cirrus Apartments, which are set to be finalised by September.

The sculptures, created by renowned WA artist Anne Neil, offer a welcoming feature to residents and visitors alike, and are set to appeal to a wide cross-section of people of all ages.

Based on the themes of hobbies and modelmaking, the artworks have a sense of fun and playfulness, and all use the parts and shapes of a Hawker Hurricane model making kit as inspiration.

While three of the artworks are relatively tall, the fourth is much smaller and can double as a seat.They all mark entry points to the new Cirrus Apartments building, and are set to be used as meeting points, as well as landmarks.

North Fremantle artist, Anne Neil, who has been working in the area of public art for more than 28 years, was commissioned to create the artworks back in 2018.

“It has been a real thrill to be working on this project, and in fact it has been quite personal for me as my father was a radio operator and flew for RAAF in WWII,” she says.

“He was a very private man and although we knew a little bit about what he went through, this project has enabled me to connect with him in many ways, even though he passed away several years ago.

“I’ve met a number of museum volunteers as a result of this project, many of whom were my dad’s age, and I have been able to sit in some of the planes my father flew in and understand a little more about some of the experiences he would have had during the war years.”

Anne explains that she was spoilt for choice in terms of inspiration for the project, with the time she spent at the museum also bringing back wonderful childhood memories.

“I purchased a few model aeroplane kits when I was first working on the project, and luckily managed to track down a balsa wood kit,” she explains.

“I found the small parts intriguing and beautiful with their stamped part numbers and recesses, and this inspired me to create new sculptures from replicas of the kit pieces.

“Like the sculptures, the external precast concrete wall artwork is abstract and extends the original concept story with the low relief patterns being inspired by the spaces left in the balsa wood sheets when the shapes are pushed out.

“The wall low relief patterns add visual interest to the eastern façade and serve as a focal point and the metal shapes are lit at night providing a welcoming interface at night.

“From all of the aeroplane kits available, I chose the Hawker Hurricane model, as this plane was pivotal to the success of the Battle of Britain but was largely unrecognised for its contributions.”

The four sculptures will be installed by late July/early August and are set to complement the estate’s landscape and the new contemporary Cirrus apartments. Check out of Facebook page @RAAFAWA. We hope you enjoy them.